With respect to the claims regarding agriculture, ecology and land use made by Jacobson, et al (2013) the following claims will be evaluated for their feasibility.

Land Converted for Farm Use

You may click on all images to enlarge them or to be brought to their original website.

How do these solutions help the agriculture in NYS

How has this affected New York State’s local farming

Claim: The infrastructure for all proposed sources of energy are environmentally safe and will not interfere with the ecosystems of the areas where they are implemented.  (While this is not a specific claim addressed in any section of the 2013 Jacobson study, it is an assumption made by Jacobson that will be evaluated).

The NYS Energy plan is focus on implementing new technology to harvest solar, wind, and hydro power. Since this project’s goal is to implement new methods and technology to preserve the environment, all of the infrastructure for the proposed sources of energy should be environmentally safe and will not interfere with the ecosystems of the areas where they are implemented. As a disclaimer, there will a sunk cost for construction with respect to air pollution produced. However the long term benefits of producing clean energy should compensate for these sunk cost

Due to the design of wind turbines, they consume a small percentage of land. However they do consume a large amount of air space. The majority of this air space was previously used by birds and bats. Therefore installing wind turbines does impact avian life. The impacts include mortality rate due to collisions, barrier effect, and displacement due to disturbance and habitat loss (9).

Offshore wind compose the largest part of the proposed NYS Energy Plan. It is therefore more even more important to ensure that the infrastructure is environmentally safe given the large number of turbines that will be constructed. Fortunately offshore wind farms have already been implemented in areas like Denmark and extensive case studies have been performed on them.

Migration patterns of birds in the United States. Source 8

There are a variety of different ways to harness solar energy. They include..

Claim: There are 4,000 premature deaths a year in New York State due to air pollution. (Section 8 of the 2013 Jacobson study)

Below are maps of the estimated annual mortality rate due to air pollutant (17).

Please click on the picture for the full equation

Population and PM2.5 amounts for various regions in NYS

Map of NYS showing regions as defined above

Claim: Natural Gas, solid and liquid biofuels and nuclear power all present too many negative ecological effects to be included in a long term energy plan. (Section 2 of the Jacobson study) 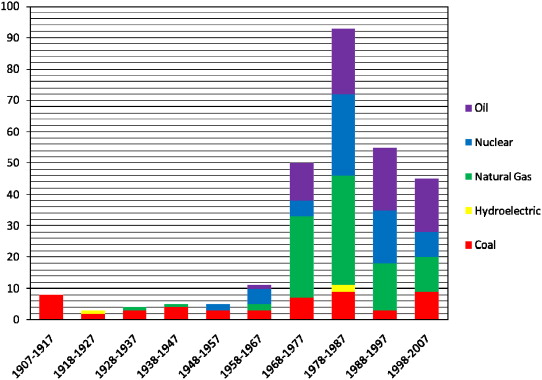 In conclusion, the proposed infrastructure from the Jacobson study can produce negative ecological effects. We should therefore introduce the methods mentioned above as to mitigate the negative effects and monitor the areas were this technology is implemented to check for damages. With all these technologies, there will be a carbon and air pollution sunk cost for construction. However the long term benefits of producing clean energy should compensate for these sunk cost. Jacobson claim that there are 4,000 premature deaths in New York State due to air pollution has been proven to be a higher estimate than the current premature death rate because of the decrease in air pollution and the overall death rate over the last few years. Lastly, we agree with Jacobson claims that natural gas, solid and liquid biofuels and nuclear power all present too many negative ecological effects to be included in a long term energy plan. These sources produce air pollutants, and radioactive materials in the case of nuclear power, and therefore should be eliminated from use once the technology and support to switch over to 100% wind water and solar energy is produced.

Claim: The following percentages of New York State would need to be set aside for the specified types of energy infrastructure needed to produce the necessary amount of energy to power the whole state. (section 4 of the Jacobson study).

Although Geothermal Power Plants may not be feasible in New York State, Geothermal energy can be harnessed to heat homes in the form of open-loop, closed-loop, or standing column systems.

Aside from regions near the Great Lakes and Atlantic Ocean, the area with the highest wind energy potential seems to be around the Catskill mountains.

Conclusion: Although regulations may alter the actual amount of land used, there is still enough land in NYS to appropriate to Geothermal and WWS energy.